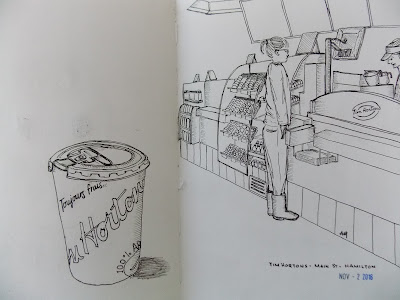 I recently purchased these inks from Aboveground (awesome staff and customer service), one of my favourite stores in Toronto that sell art supplies . These inks are acrylic-based, pigmented, water-resistant, and non-clogging.  Acrylic-based inks are normally not advisable for use on fountain pens, but I heard people using these in their fountain pens without any problem.  But because they're acrylic-based and pigmented, I would advise you to wash/clean your pens between inking and also not to leave the inks in your pens too long when not in use.

I inked my Jinhao and Lamy fountain pens with each colour and am amazed how well these inks behave in my pens.  They flow very well.  I'm even more amazed at how vibrant and beautiful the colours are when laid on paper.  I made a sketch of each bottle below on Stillman & Birn Alpha sketchbook.  There is no bleeding or feathering whatsoever.

I am very happy with these inks...all 6 of them!  I only wish there were more colours offered.  I may actually experiment by mixing them with each other. 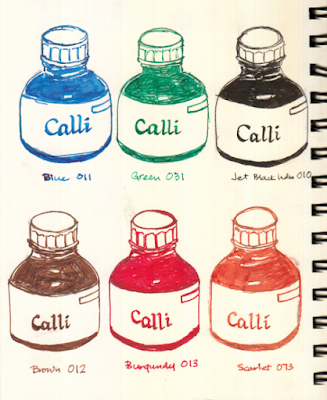 I thought I would try another way of drawing yesterday. This looks too busy to me. I think I have overdone it. I didn't even finish the shadows as that would just make this too messy. Need more practice... 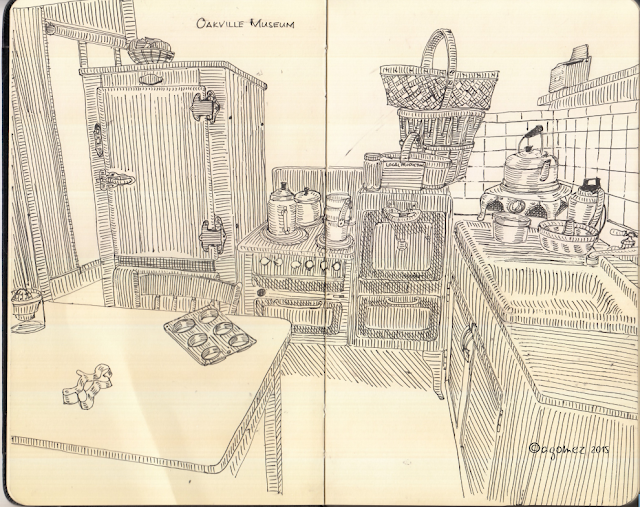 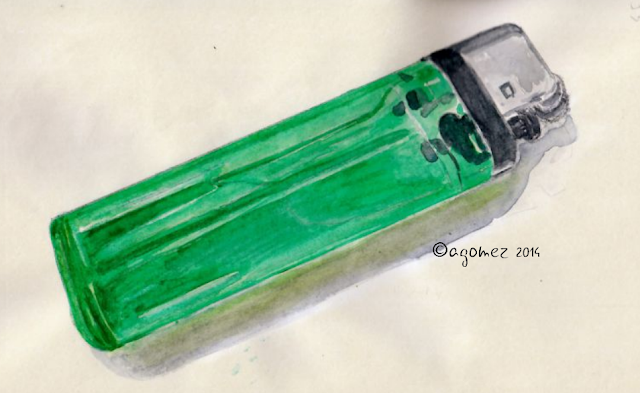 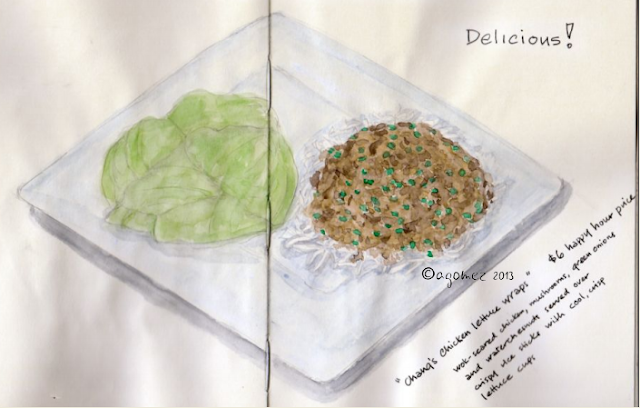 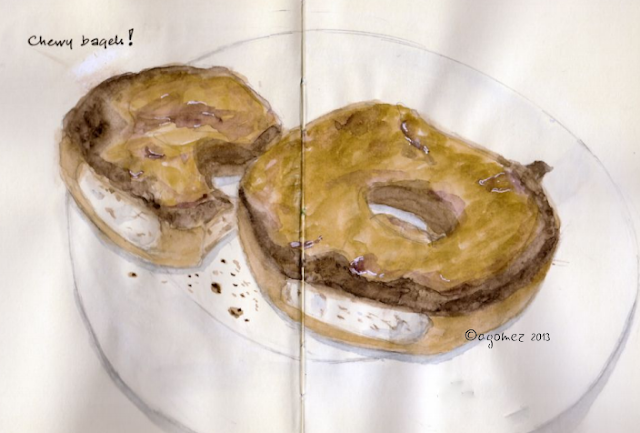 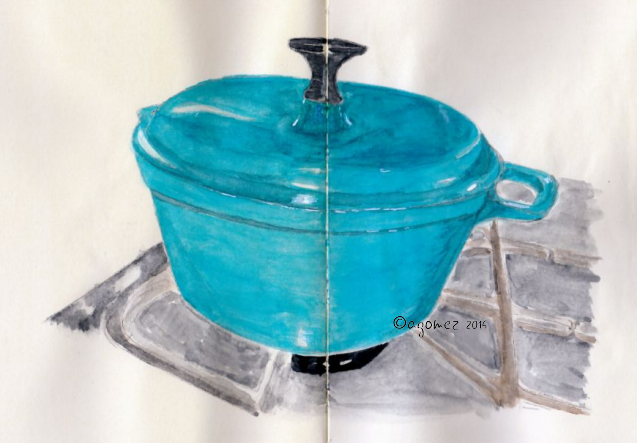 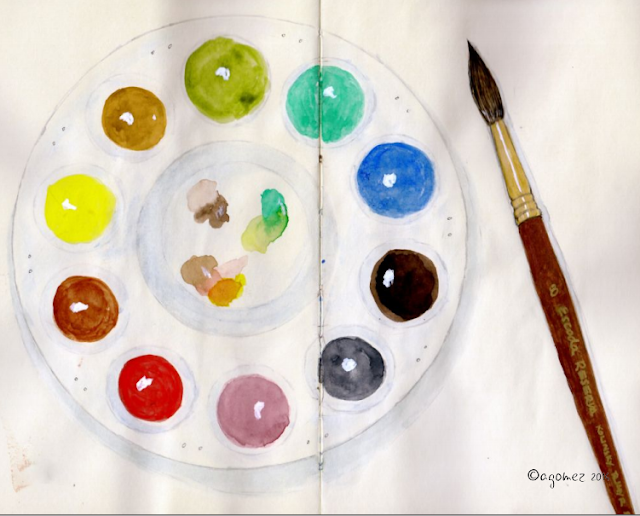 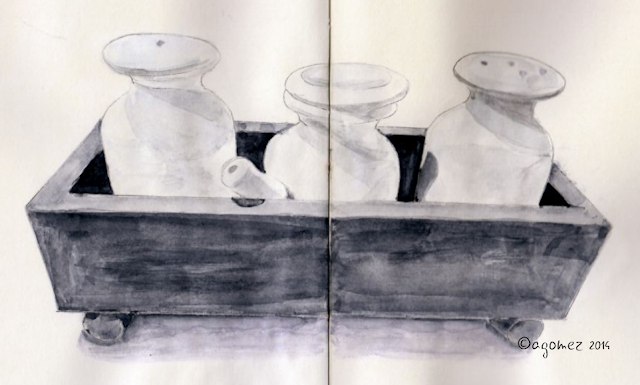 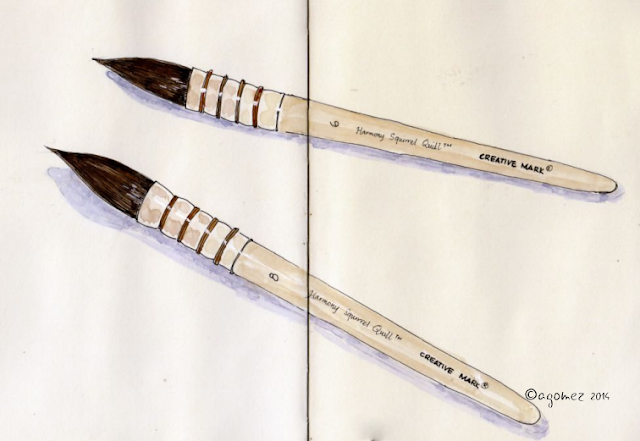 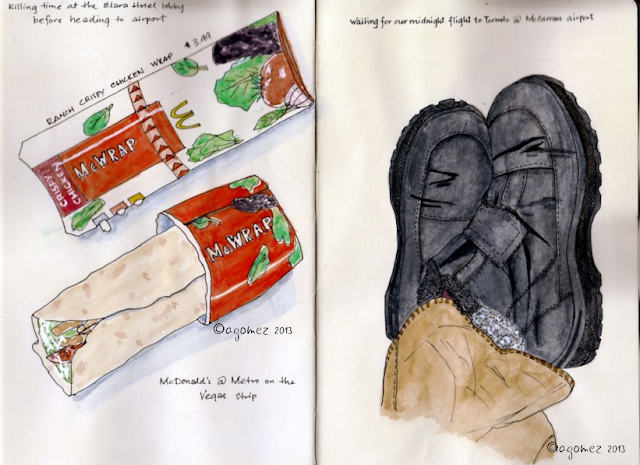 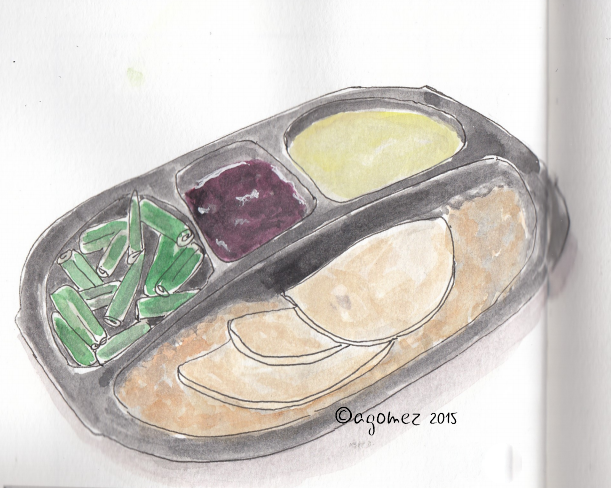 So, I had this the other day. I hadn't had one of these in, perhaps, almost 25 years when I just started working and hadn't had the money to spend around. I picked this up at a grocery store thinking that it was good to keep in my freezer when I didn't want to make anything for lunch. Finally, I ate it. Yeah, it was in my freezer for 3 months, so as you can tell I wasn't that excited to eat it. It tasted not as bad as I thought although the texture of the mashed potato was undescribable and the turkey pieces was rubbery. Forget about the stuffing and the cranberry sauce - I wasn't brave enough to touch those. Would I buy this again? No. 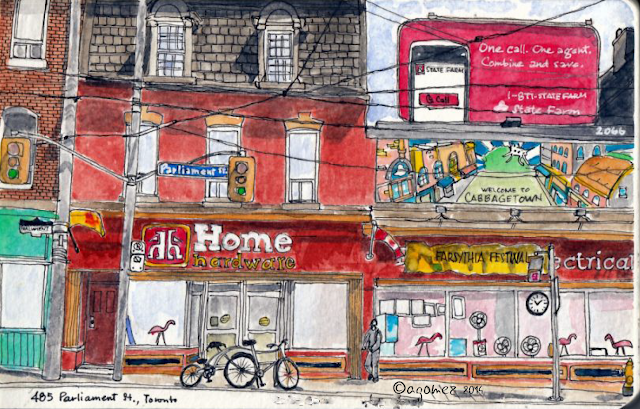 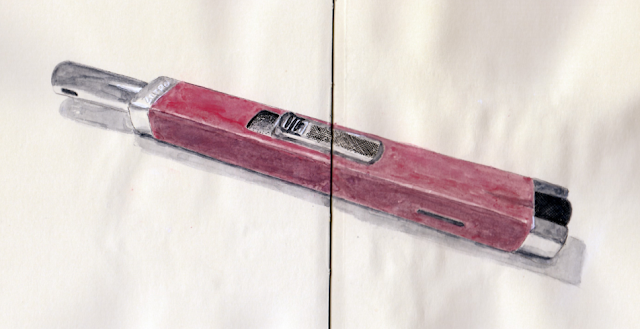 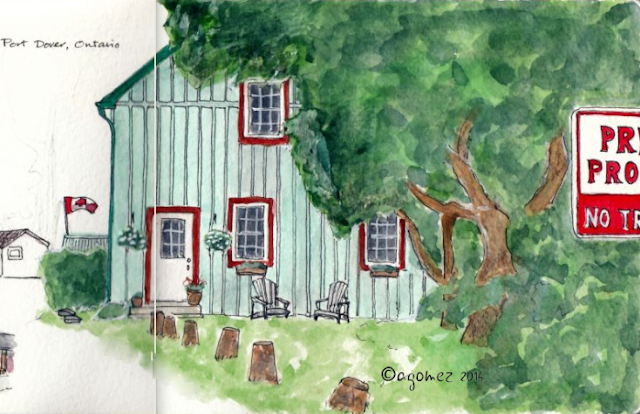 A few of my artwork during my cruise in the East Mediterranean this year. 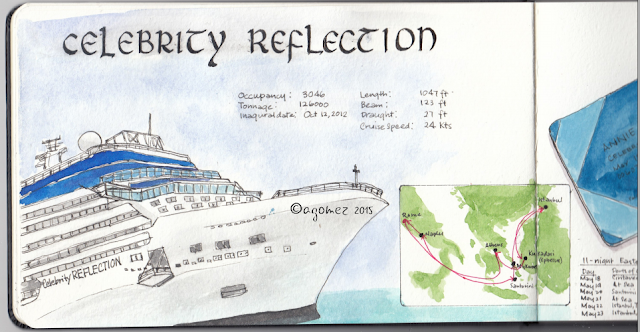 Sponge for your Brushes

I use either a paper towel or a sponge to soak up the water off my brushes. Placing the sponge (or you can fold up a couple of pieces of paper towels in there) in a travel soap container allows the moisture to be contained in the container. It's also great to carry around with you when you're doing 'plein air' or when traveling. 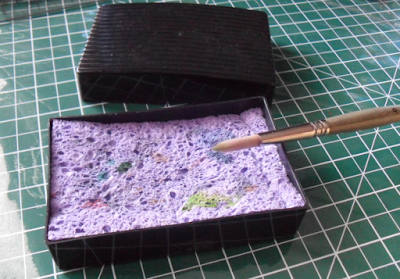 I was in Las Vegas last month for a week. In fact, I go there every year. This was actually the 10th time I have been to Vegas in an 8-year span. And believe it or not, Vegas is a place where I can relax and, at the same time, have fun. Many I tell this to cannot seem to understand why the Sin City is a relaxing place for me, but it truly is. Elara Hilton Grand Vacations is right on the Strip, and is connected to the Miracle Mile Mall, just as Planet Hollywood. This alone spells 'c-o-n-v-e-n-i-e-n-c-e'. The hotel suite we get year after year is about 900 sq. feet. It has a full-functioning kitchen, a jacuzzi in the bedroom, a washer/dryer combo, 4 flat screen TVs, a projector TV, and a huge dining table where I can freely draw while watching a series of shows on the TV over it. Vegas also never sleeps, meaning you can go out any time at night and you are bound to find many stores that open late. There is also an unlimited supply of entertainment (no, not that kind of entertainment).

In the previous 9 times I was in Vegas, I have never been to the Valley of Fire State Park. As a matter of fact, I have never heard of it. We drove there in our rented car, but can't remember how far it was from our hotel. A couple of hours maybe? Right before you get to the park, you will find the visitors area where you're required to pay $2 per person if you came on a bus or $10 per car. There was no attendant present when we were there. You're supposed to deposit your money in the adjacent box where the map is located. It's an honour system. The money is used toward the maintenance and upkeep of the park.

We took many photos at the park. The colours of the rocks were vibrant. But we didn't last long because it was super hot. Vegas has been breaking record heat that week, and 35C was just too much for us.

After leaving the Valley of Fire, we went a little further and exited into Mesquite, still part of Vegas. We had lunch at Peggy Sue's Fifties Diner. If you have been to the Peggy Sue's 50's Diner (notice 50's vs Fifties) in Yermo, California just outside of Vegas, you can immediate tell which restaurant is more authentic or has the 50s feel. These two locations are not affiliated to one another, and quite surprising that they are both named exactly the same, well, except for the 50's versus Fifties. They're located in separate states, so obviously there was no infringement. There was no Peggy Sue in this restaurant, but I know for a fact there is a Peggy Sue in the one at Yermo. She is the owner of that restaurant. The food in this diner in Mesquite was nice and warm, but the person who waited on us was a little cold on the personality side. But that did not deter us from enjoying our meal.
http://peggy.bestrestaurantsmesquite.com/
http://www.peggysuesdiner.com/ 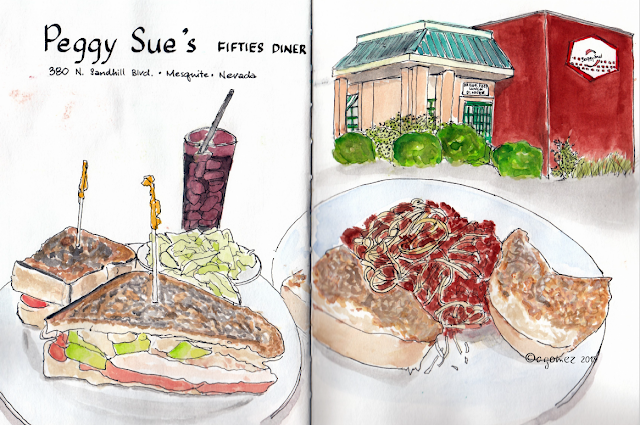 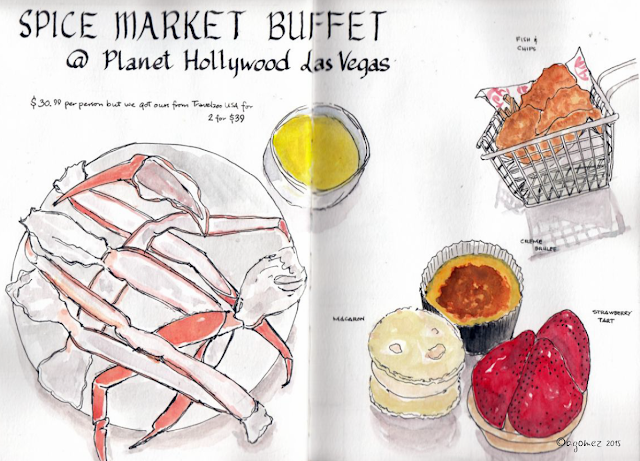 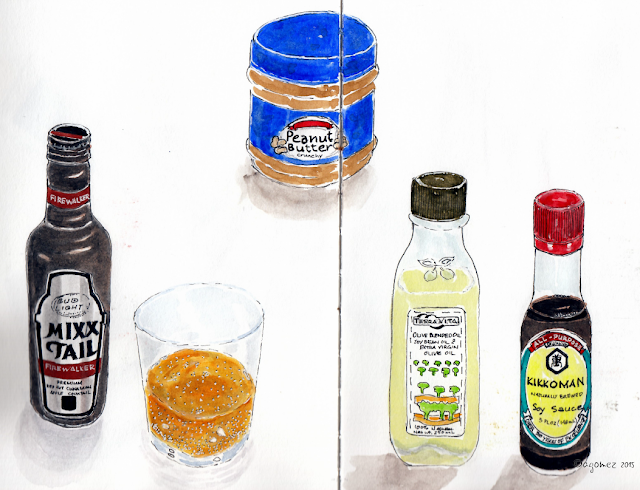 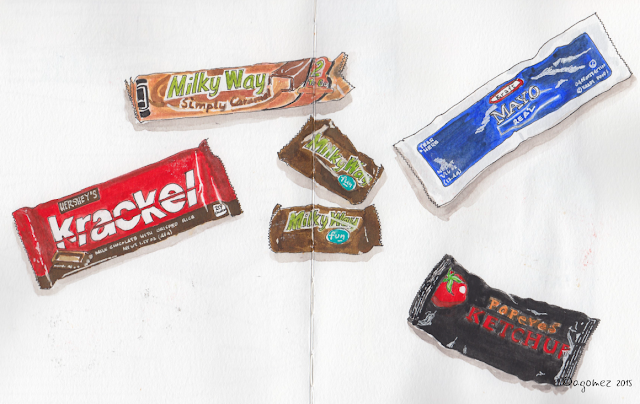 My sister took us to lunch at Teddy's Restaurant in Oshawa last month. There was endless traffic on the 401 that day due to a multi-vehicle pile-up accident involving 19 people in Ajax the night before, and a fresh accident just a few metres away from the previous one. We were all starving and didn't get to eat until around 2:30. I had the beef liver. I didn't expect a plate of 3 large pieces of liver. It was superb! I give Teddy's two thumbs up for their generous portions of food. I ended up taking two slices of the liver home and had it for lunch and dinner the following day, and again for lunch a day after that. One serving goes a long way for me.
www.teddysoshawa.com 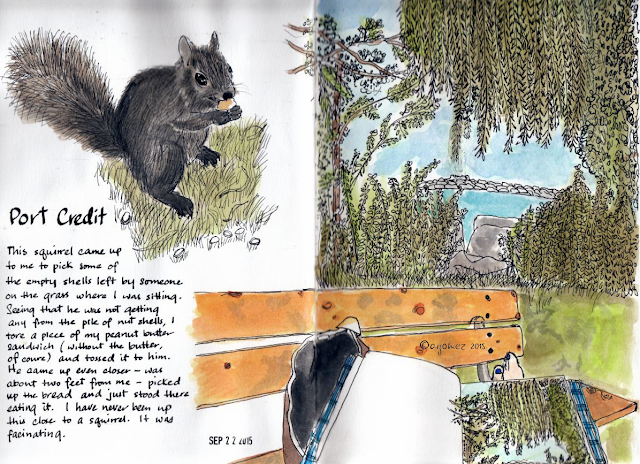 The above painting was actually done on Sept 22, 2015 in Port Credit.

Port Credit is located at the mouth of the Credit River along Lake Ontario in Mississauga, just west of Toronto. It is referred to as Mississauga's Village-on-the-Lake. Today, was a perfect day to sketch. Along with my Nikon L320 camera, a sketchbook and a handful of art supplies, I brought with me my trusty green camp chair, a couple of peanut butter sandwiches and a thermos of piping hot coffee. What is art without food? Or what important is art if you're hungry? 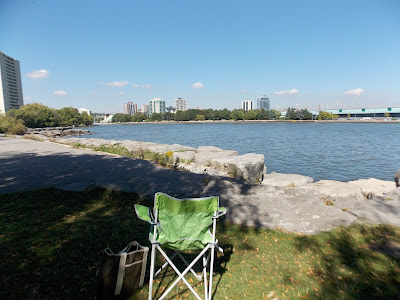 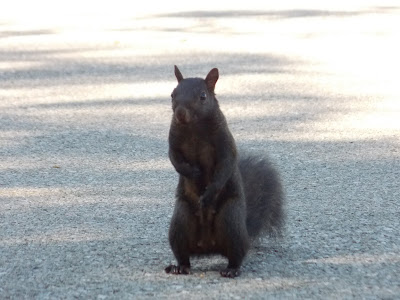 This squirrel actually came up to me wanting to get to the pistachio shells that someone had littered on the grass right where I was sitting. Seeing that the squirrel wasn't getting anything from licking the saltiness of the nutshells, I tore a piece of my peanut butter sandwich and tossed it on the grass toward the animal a couple feet from my feet. The squirrel must have been very hungry that it was brave enough to come very close to me. He picked up the bread and ate it right there without fear. It was fun to watch him take tiny nibbles of it.